How are companies investing in, implementing, and evaluating the ROI on VAR in enterprise markets?

On Thursday May 5th, Amanda Clarida, Manager of Learning Design and Development at Volvo Trucks; Jeremy Balkin, Head of Innovation at HSBC Bank USA; and Szczepan Baran, Head of Emerging Technologies at Novartis, spoke at the online XRIntelligence conference on the adoption challenges of XR for enterprise.

Volvo Trucks and Novartis began to implement VR into their workflow in 2017, and in the same year, HSBC began market research in the VAR (VR & AR) market.

“We wanted to give [our team] the best opportunity to see and interact with the trucks and products and we considered Virtual Reality to be the best option at the time,” said Clarida. Volvo initially used VR as a delivery platform for training sales teams on new truck models. Even then, not everyone could attend the bigger launches that the company was planning. In the last few years, Volvo has also used VR for testing and in the product design pipeline, in addition to training.

At Novartis, the pharmaceutical company is consistently monitoring emerging technologies that can expedite the go-to-market process for new medical products. Beginning with the early stages of R&D, chemists and biologists used VR to look at proteins and how they would interact with certain molecules.

“We also used Virtual Reality later on in the development of medicines for production and teaching associates aseptic procedures. That was challenging to do in physical environments. Doing it in virtual environments helped us to expedite training and medicine delivery to patients,” said Baran.

Telepresence is another use case that Novartis is exploring through their partnership with Microsoft, using the Microsoft HoloLens. In a basic application, telepresence can bring together key stakeholders to make medical decisions, and then, when paired with AI, databases, and the ability to collect images and videos, Baran predicts that in two to three years we will be able to use predictive analytics on this information for far more advanced decision making techniques.

After use cases, the question on the tip of everyone’s tongue is how much budget is going towards the implementation of XR in enterprise applications and what is the state of the market?

“Digital technologies require pretty significant investment, not just financial but also the expertise,” said Baran. In pharmaceuticals, the bar is also high from a regulatory aspect. For this reason, the company has focused on preclinical implementation to show real value and impact in the earlier stages where there is slightly less regulation.

At HSBC, their innovation team is closely monitoring the value, risks, and disruption of VAR technology in multiple markets. “Fast forward to where we are today, and every company is thinking how do they onboard new staff in a COVID-world where people are working remotely, indefinitely” said Balkin. 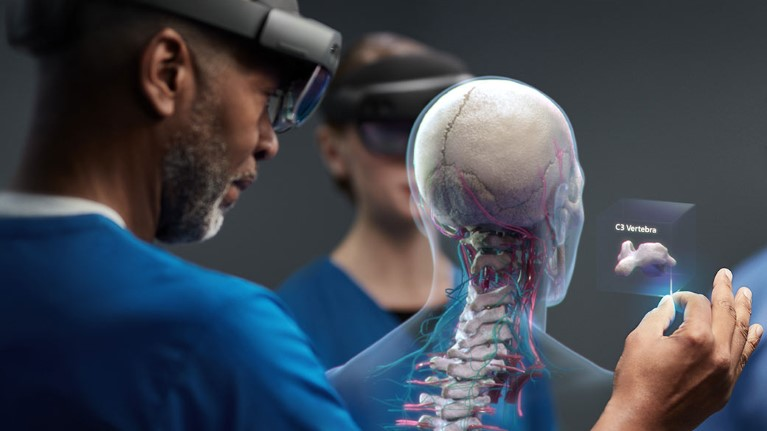 In competition with VR there are also other priorities in the digital space for consumer experiences. VR is still competing with desktop and mobile applications for teleconferencing and collaboration. We are seeing a steady rise in the adoption of VR headsets in both the consumer and enterprise markets, although, until more intuitive and high-quality content and tools are available, we will continue to find significantly higher audience numbers attending in 2D formats.

“When you think about allocating resources and budgets, there are a million different priorities and the cost of investment. And, like all technologies and new technologies, there’s diminishing costs as there’s more R&D and adoption,” said Balkin.

Looking at the current adoption rates, specifically at AR in the consumer marketplace, Balkin said that as adoption becomes ubiquitous, companies that do not provide AR experiences will become irrelevant. “These technologies are going to be adopted regardless. In a socially distant world and in a new normal- we don’t know what it’s going to look like- all the more reason why these things are going to be considered very valuable,” he said.

In the past 8 weeks while most of us have been stuck at home, the adoption curves for digital technologies have abruptly changed, supporting the idea that a new normal is upon us. Companies that have been working with immersive technology for a few years are well equipped to expand their VR programs, and across the board, technology adoptions that would usually take five to 10 years are now happening in weeks, “This is one of the positive changes that will come in the industry for new customer experiences,” said Balkin.

Echoing this, Clarida said that we will soon be looking at a new normal that includes more teleconferences, virtual interaction, and investment to reach audiences as consistently as we used to in person. “This could be a really good time to explore these platforms,” she said.

For companies who are looking to invest in VAR for the first time, the cost of entry is far lower. Measuring the ROI can be difficult, although from the perspective of early adopters and researchers of immersive technology such as Volvo, Novartis and HSBC, innovation and market readiness is clear.

Some would say that necessity is the mother of all innovation, while I say that the innovation is here, and a necessity, or crisis, is what will spur the change. It was a pleasure to moderate this panel with Szczepan Baran of Novartis, Jeremy Balkin of HSBC and Amanda Clarida of Volvo Trucks.

Anne McKinnon is an independent XR consultant and writer. She is actively engaged in innovation at the intersection of music, the arts, gaming and tech. Anne is US project lead for the band Miro Shot.