The groundbreaking XR festival brought together some of the greatest minds in the industry for a one-of-a-kind live event.

“We are creating a world where anyone, anywhere may express his or her beliefs, no matter how singular, without fear of being coerced into silence or conformity.” – Extract from “A Declaration of Independence in Cyberspace” – John Perry Barlow 1996.

For many of us, the 90s dream of what the internet was supposed to become is a difficult thing to imagine: a place of freedom and collaboration that would bring about new world order. You could be anyone you wanted to be; free to go anywhere, transcending borders, gender, and governments.

Sadly, things haven’t exactly panned out as expected. The modern internet is mostly a cold prison of data mining, clickbait, and fake news.

However, for a growing group of people, the current wave of XR is humanity’s best (and last) chance of a true digital utopia—an extra life we didn’t know we had.

But actually trying to pin down the current state of XR—not to mention the subcultures, artists, and renegades who are pushing the medium forward—is an almost impossible challenge.

This year’s Venice Expanded set out to do just that, scouring the metaverse for the most exciting and important works; a Hadron Collider of film, gaming, and social experiences, brought together in a single festival. The question is: how can a 78-year-old film festival steeped in tradition ever hope to adapt to a new medium, new approaches, and new audiences?

To attempt this seemingly impossible task, the 78th Venice Biennale brought out the big guns. Liz Rosenthal and Michel Reilhac co-curated the event, which was produced by XR luminary Mike Salmon. XR studio VRrOOm was in charge of making sure that the (frankly mental) plan for this festival actually worked.

“The future is already here, it’s just unevenly spread out.” The famous William Gibson quote resonates strongly with Mike Salmon, who highlights that while the world’s media is speculating on what the metaverse might be, the VRChat community is living already living it.

“VRChat is to VR what YouTube is to film,” he remarks, highlighting the way the platform has created an explosion of content and creativity.

I start my interview with Rosenthal and Reilhac on a glitchy zoom call, with the awkward delay and low-res visuals that will be all too familiar to anyone living in 2021. Rosenthal outlines the structure of the festival describing a floating island with a spiral staircase, a central hub with 36 portals that lead to a VR world dedicated to each of the selected works.

“It’s probably easier if we just meet you there…” she says.

We then log into VRChat (the platform chosen to host the event) and I am through the looking glass. I am no longer in my dreary apartment in Paris, I am plunged into the dazzling world Rosenthal has just described. A kind of hyper-real Esherian city, if Esher had been up all night smashing Monster energy drinks and playing Fortnite that is.

VR is a complex technology to understand, and even harder to exhibit in a “traditional” festival setting. In addition to this, work is being created by different artists and disciplines, from “classic” (flat) filmmakers to game developers, groups of hackers, and digital artists.

Liz explains the challenges of gently nudging the traditional filmmakers towards XR—and of the special courses they had to run for the VRC community—to explain how film festivals function, and why the hell they even exist. It sounds like she’s talking about introducing an ancient civilization to a strange alien race, where each species is carefully trying each other’s traditions and technologies. 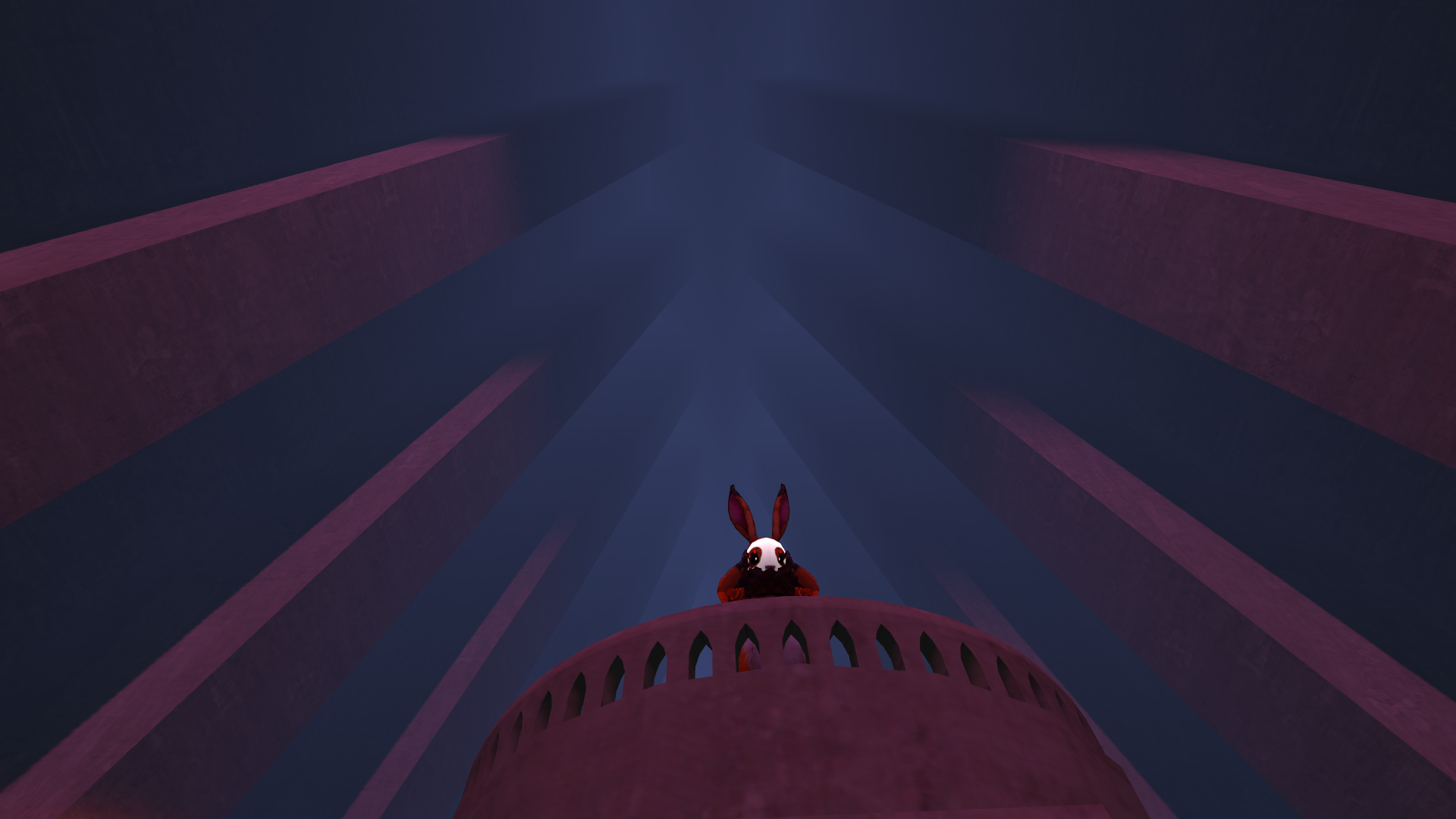 In the VR community, Liz Rosenthal is something of a legend, somehow finding the time between her work at Creative XR (where she guides and nurtures fledgling XR startups) and her work with Power to The Pixel (founded to help creatives transition into immersive art) to bring the world’s most exciting medium to the world’s oldest festival.

She’s like a metaverse Peggy Guggenheim but her avatar is better dressed, a digital Clement Greenberg shining a light on a new form of abstract impressionism. Michel Reilhac is a director and producer, whose career crosses between working on Hollywood movies, critically acclaimed cult classics, and immersive installations. If anyone can pull this off, it’s these two.

In VRChat, MetaLiz’s avatar looks incredible. She’s wearing a kind of Japanese silk evening dress, rippling with waves of shimmering light. Her trademark black curls, when I am able to focus on them, are a twisting mass of pulsating nebulas that endlessly evolve into the space she and her team have created for the event.

“The VRChat community made it for me!” she says, proudly referring to her avatar. The fact that she has turned herself into a walking art piece, championing the creators she loves, tells you a lot about her motivation for the unimaginable amount of work that has gone into Venice VR Expanded

After a polite pause, Liz then remarks on my outfit: “Oh, you’re using one of Sara’s avatars!”

I look down and realize that my avatar is still set to a character from the performance I attended last night. I am wearing a sort of fluffy cream tutu made of clouds, with a bra and matching tiara made out of smaller clouds or possibly flowers.

The night before I had been fortunate enough to attend Sara Lisa Vogel’s mesmerizing performance featuring live choreography; a narrative VR experience called Exploring Home, created especially for Venice Expanded and soundtracked by VR and AI genius Ash Koosha. In a piece about identity and acceptance, Vogel danced from her studio in Montreal in front of a private audience who themselves became part of the performance by changing their avatar’s identity and following Sara through a seemingly infinite landscape she has created for the piece.

During last night’s performance, Sara was ethereal, leaping across the world she has built and danced in a full-body motion-tracked rig. Today, however, in the warm digital light of the Venice Film Festival, I am seriously regretting the tutu…

Fortunately, however, I am able to maintain what I hope is an ice-cool level of journalistic professionalism. I am here for answers, to get to the bottom of what is happening in XR, and what might happen next.

The layout and logistics for the festival are enough to make any Unity developer break out in a cold sweat. Guests arrive in a central hub, a dream-like virtual reproduction of Venice, where a spiral staircase leads to a gallery of 36 portals, each one leading to one of the virtual worlds built to showcase the work of the nominees, especially optimized to fit within the constraints of VRChat.

“Our aim was to try and show what is happening in XR, to champion the different approaches to the medium and the practice of VR itself. The variety of the work being created is staggering, and that’s what we are trying to share with the world” says Reilhac.

The importance of the work being shown, and its significance, are in stark contrast with the sheer weirdness of VRChat, and of this current wave of VR in general. Michel’s avatar is a cyborg with a metal arm, wearing a leather bodywarmer with a big fluffy collar, tight purple trousers, and some pretty thugged-out neck chains.

I follow Liz and Michel down the staircase through to the room of portals.

“Where do you want to go?” Asks Liz. My eye is drawn to The Devouring, a multiplayer horror escape room game built entirely in VRChat. I’m extra curious about this particular piece, as it is among the first VRC worlds to go from an independent fan project to a commercial release (it will see its own standalone release on Steam early next year). A move that echos the modding community of the mid-2000s, where fan projects such as Counter-Strike, Team Fortress or Rocket League would go from “indie mod project” to triple-A releases.

Moments later we are standing in front of a car. “I’ll drive,” says Michel, and I jump in the back, with Liz in the passenger seat, and suddenly I am in the opening scene of The Devouring, being driven across a lost highway by a Frenchman with a bionic arm and a lady in a ballgown who has an encyclopedic knowledge of the Venice Expanded Festival.

For the next 40 minutes, we search an old mansion for keys and evade dark demonic clouds before finally ending up on the surrealist landscape full of Bliss In The Ear Of The Storm. Michel explains that the recent wave of XR reminds him of the early spirit of the internet in the 90s, of a counterculture developing new practices, building a new world for themselves.

While the rest of the world talks about what the metaverse will be, or how we should prepare for it when it arrives, many of the XR community are living it day-to-day. It’s a place where identity is fluid, where time and space can be shaped and warped. Liz, Michel, and their team have done more than curate a collection of interesting XR pieces for the Venice Biennale. They have built a snapshot of a world that is complex, evolving, and beautiful.

Most importantly of all, they have captured what the metaverse is rather than making assumptions about what it might one day become.

Venice Expanded is pure VR. It’s full of urgent and profound pieces covering everything from gender inequality to racism, it is also completely bonkers, with hidden rooms and easter eggs (you can climb a tower and grab a pigeon to fly around the world). Most film festivals think they can just throw “the VR bit” into their time-honored system of screenings and showcases, but Venice VR Expanded manages to get right to the core of what this medium actually is. It’s as much a work of anthropology as it is of curation; an exposée of a new art movement and its subcultures.

Upon saying goodbye to the event, I left feeling that XR might be picking up from where the original dream of the internet left off. A place where we might transcend the darkness of a world that often feels as though it is closing in around us.

I wave goodbye and the pair log out, leaving me to stare across a landscape that feels so surreal and yet somehow now feels like home. I left with feelings of hope, a sense of place, and a creme tutu made of clouds.

Check out the full lineup here.